In this review I’ll be looking at Fyrinnae loose eyeshadow singles in the shades Jade Ghost, The Alchemist, Werewolf Moon, and Purgatory.

This teal eye look was created with Jade Ghost all over the lid, Werewolf Moon in the crease, and The Alchemist in the outer corner of the eye. Fyrinnae Beyond Binary (covered in Fyrinnae Loose Eyeshadow Singles Review Part 1) was used on the brow bone. All shadows were applied over Fyrinnae Pixie Epoxy and Urban Decay Primer Potion in Eden. Also used were Stila Stay All Day liquid eyeliner in Midnight and Tarte Lights, Camera, Lashes mascara.

Fyrinnae Jade Ghost is a glowing loose eyeshadow that sells for $2.95USD for a mini jar or $6.95USD for a full sized jar on Fyrinnae’s website. Fyrinnae describes this shade as a “satiny, pale white-green in the jar, but once applied, it has the iridescent glow of light green shimmer.” This shade is very similar to Rainier (covered in Fyrinnae Loose Eyeshadow Singles Review Part 4) but has a white base instead of a coordinating base. The color is an ethereal glowing green. It’s also a good dupe for the shade Emerald in the Kat Von D Alchemist palette. 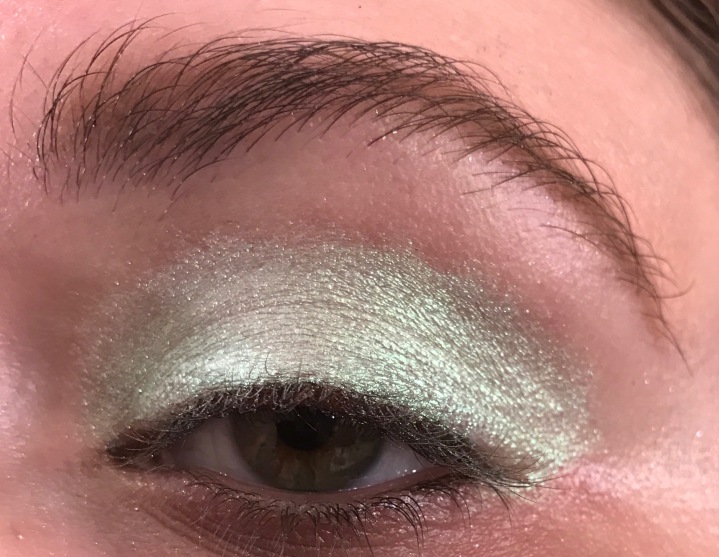 This shade is actually quite versatile. As an eyeshadow, it has a smooth application and surprising opacity given how light it is — I was actually able to use it to cover pretty dark colors. It will work fine with regular primer, but glitter primer really seems to make it glow. This shade will also work as a cheek highlighter on many skin tones. My favorite use of it, though, is to layer it over black eyeliner. It gives the black an iridescent, almost holographic effect.

Fyrinnae Werewolf Moon is a specialty eyeshadow called arcane magics. It sells for $3USD for a mini jar or $7.55USD for a full sized jar on Fyrinnae’s website. According to Fyrinnae, this shade is a “rich, multi-hued turquoise with a golden-green highlight that becomes blue to nearly violet when at an angle closer to light.” I found the color to be more of a teal in general that change to a sort of aqua when I photographed it with flash.

While many of the arcane magics really need a glitter primer, I found this one works fine with just a regular primer (although glitter primer does bring out its shimmer). The teal color of this shade works with both green and blue tones, especially since the color shifts between more of a greenish teal and blue. I did experience some fallout with this shade because it had a fair amount of glitter. However, once I got it on, the color stayed throughout the day without fallout or fading.

A beautiful shimmer shade that works with minimal prep

Fyrinnae The Alchemist is a specialty eyeshadow called arcane magics. It sells for $3USD for a mini jar or $7.55USD for a full sized jar on Fyrinnae’s website. Fyrinnae describes this shade as a “striking green-aqua shimmer on a semi-transparent black base. Closer to light or angled, it turns violet, purple, then dark pink.” I couldn’t see the color change very much of this shade, even when photographing with flash. The color was a deep, blackened teal.

To see any sort of color change effect and to really see the teal shimmer of this shade, I would recommend using a glitter primer or at the very least a regular eyeshadow primer. The shadow applied smoothly and evenly but did have some fallout. However, there was not fallout throughout the day once the shadow was applied. I was able to get opaque coverage with this shade after one layer, and it did not crease or fade througout the day.

A nicely pigmented shade that does have some fallout

Fyrinnae Purgatory is a shimmery loose eyeshadow that sells for $2.95USD for a mini jar or $6.95USD for a full sized jar on Fyrinnae’s website. According to Fyrinnae, this shade is a “metallic red shining over a deep black base.” The color is a deep wine red that is much more metallic than other Fyrinnae shades. 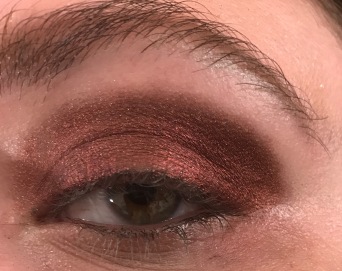 To see the metallic effect of this shadow, it really needs to be applies either wet or over a glitter primer (otherwise the red doesn’t show through). When applied correctly, the shade goes on smoothly and evenly with very opaque coverage. Fallout was generally minimal, and the color stayed without creasing or fading throughout the day. I personally like to foil this shadow as a liner.

A nice rich color when applied correctly. Works great as a liner

Thank you for visiting! Here you can find posts about the science behind beauty products. Additionally, you can find swatches and reviews of different cosmetics.